Yesterday, Federal Emergency Management Agency (FEMA) announced , they’d be revising flood maps for Washington, D.C. over the next six months.  Per FEMA’s flood map database, the most recent DC flood maps are from 1985, so I’d say DC is in good need of some updating.

The maps help local officials and residents identify known flood risks, and assist in making insurance and development decisions. Maps are updated, per Congressional guidance and direction, to provide communities with solid information on how to mitigate and insure against the risks posed by floods.

DC home and business owners who purchase flood insurance should talk with their local insurance agent to discuss how revised flood maps may affect their options and rates. More information on flood insurance is available at www.floodsmart.gov. As the flood flows on, more pictures flood in — this time, with news of the parks.

Great Falls and its ever-popular Billy Goat Trail have been closed since Friday. Earlier today, a park official told me the towpath was accessible for a short distance around Old Angler’s Inn, but underwater above and below that point.

In addition to inundating Washington Harbour and the Mt. Vernon Trail, the Potomac has spilled into now-closed Theodore Roosevelt Island and covered parts of the Potomac Heritage Trail as it heads north from the island’s parking lot.

And while there’s the broken lock at the C&O Canal, at mid-afternoon there was just quick-flowing muddy water — and fortunately no houses or pianos or cows floating through. More pics after the break. END_OF_DOCUMENT_TOKEN_TO_BE_REPLACED We’ve got a major Coastal Flood Warning today, with the tidal Potomac swelling to 3-4 ft above flood level, and 5-10 ft around Georgetown. Be safe and cautious if you live or work near the Potomac River or the C&O Canal, and don’t try to drive through flood water. The National Harbour boardwalk and parts of the driveway to K Street are inundated, and as has already been mentioned, a broken C&O Canal lock may cause additional flooding in Lower Georgetown. Parts of the The Mount Vernon Bike Trail are underwater, and of course Old Town Alexandria is getting swamped as well.

After the jump, a hydrograph and some bigger photos. END_OF_DOCUMENT_TOKEN_TO_BE_REPLACED 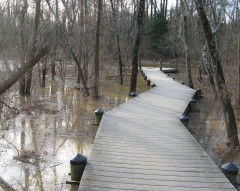 If you’re a fan of Theodore Roosevelt Island, you know it doesn’t normally look this wet. Ye olde Potomac has flooded in, raising water levels to within about a foot of the boardwalk in places.

Lots of ducks and geese are paddling around on the island, and a flock of seagulls is picking snacks out of the river near the Key Bridge.

I ran through on a late lunch break today, when the tide was rising, and it felt a bit like running on a lake. After a plane passed overhead, I heard that cool swishing, zipping sound of wind high up, above the flooded swamp. It was a cool moment indeed. If you missed ’em earlier, check out our morning flood pics around town, or see more of the island after the break.
END_OF_DOCUMENT_TOKEN_TO_BE_REPLACED The Washington Harbour Boardwalk in Georgetown is underwater this morning, as the muddy, debris-strewn Potomac River swells to flood level following Sunday and Monday’s rain. NWS has issued a Coastal Flood Warning for our area. Highest afternoon tides will be around 5:30PM.

The rest of the Harbour is behind a floodwall that they have ready just for these occasions, so those of you who eat at Tony & Joe’s, Agraria, Cabanas, Nick’s Riverside Grill, and Sequioa should be just fine and dry.

After the jump, a video of how fast the river is moving, more photos, and the view from Old Town: END_OF_DOCUMENT_TOKEN_TO_BE_REPLACED