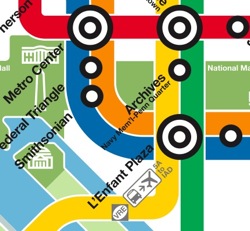 Rush hour on Metro tends to be synonymous with things like “Orange Crush” and “Trains Offloaded” and “Why, oh why, did I try to take public transit today?!” While Metro can’t, it seems, fix things like intra-office corruption and driver mistakes, they are trying to do things to make it easier for the general commuter to suffer less. Starting in June, the Orange line will get 6 extra trains per hour (3 in each direction) which will run from Vienna to Largo Town Center, for an 18% capacity boost. The move forks the Orange line into traditional Blue line territory. In addition, the Yellow line will get forked at King Street to include some trains heading to Springfield to increase southbound capacity from the core.

Metro has also said that additional “transfer free” options will be coming, but failed to detail them in their press coverage. This would include something similar to the Farragut West/Farragut North walking transfer, but it’s hard to say until Metro makes it clearer.

With the Silver Line coming in 2014 (we hope), map changes that include the line out to Dulles Rail have begun in earnest, and a dashed-line extension now splits off from the Orange line to the northwest between West Falls Church and East Falls Church and bears several empty circles where stations will one day go. In addition, the market research that WMATA did has sprouted shoots, with new glyphs for buses to the airport, VRE, MARC and Amtrak, and parking options more deftly labeled. In addition, the secondary names of stations are given reduced emphasis in favor of the primary names. In addition, Forest Glen on the Red line gets a hospital glyph (but why not Medical Center?) which is new to the system.

The new map is available for public viewing on the WMATA website, and will be coming to a train car near you in the near term. We’ll see if we can get more information about the new transfer options. At around 4am last night, a truck loaded with bananas overturned on the Northbound portion of Interstate 270.  Traffic was briefly closed between the Capital Beltway and Old Georgetown Road and was  reopened in time for today’s rush hour. The southbound portion of 270 was unaffected.

If you’re driving by this section of 270, you’ll spot the truck on the shoulder, as the truck and it contents will be removed after rush hour. According to another beautifully written text message from Alert DC, your evening rush hour may be less than pleasant.  I quote:

So if you usually take 15th street to get home, you might rethink that strategy. Tired of jammed cars on the Red and Green lines? Well, Metro’s news that slipped out yesterday may relieve that somewhat. Beginning next week, Metro’s adding additional cars to Red and Green line trains during the always-fun weekday rush hour.

Metro has indicated that roughly twenty cars are being added to the entire fleet. This will boost half of the Red and Green rush hour runs to the maximum eight-car trains (the maximum length Metro can run due to station size), with the rest of the additional cars used to fill in gaps due to malfunctions or other problems.

The additional cars will boost Metro to 850 cars in service during weekday rush, the first in the service’s history. Will it help with the crush? It’s a matter of perspective, so you readers keep us informed, okay?