The holidays are upon us and if there’s one thing I’ve learned from tending bar, preparation is half the battle. So let’s get an early start on gift giving. It is Black Friday, after all. My holiday gift giving secret is I buy people booze and only booze. You can buy it online, have it shipped, and avoid all that normal holiday shopping madness. Everyone loves booze or all of my friends do, at least (admittedly, all of my friends are lushes or in Industry). And no matter how well stocked your loved ones’ bars, there’s always something they don’t have. So what do you get the drinkophile in your life when it seems like they have everything? More gin. And lucky for us, this month saw the release of three new gins on the DC market.

New Columbia Distillers released its Green Hat fall/winter selection, Ginavit, a hybrid spirit that is a mix of barrel aged and non barrel aged gins with akvavit. Before we continue, I owe you guys a bit of a disclaimer, I HATE akvavit. It is one of the only things that I have difficulty mixing with. Kümmel, malört, black pepper-infused belgian ale? No problem! But this esoteric, pervasively caraway-flavored spirit is my one weakness. And I really, really like caraway too. Just not in a liquid, high test medium. But I was excited to try Green Hat’s new seasonal offering nonetheless.

The Ginavit release party was held at Boundary Road, a refreshingly understated H Street bar. I started the night cautiously, opting for one of the cocktails that featured Ginavit, rather than the spirit straight up. I chickened out, admittedly. I told you akvavit scares me. The first drink I tried was a Ginarac, a gin based sazerac with malört rather than absinthe rinse. It was dry on the palate, not too sweet, a bit savory. With the bitter, herbal malört and the herbaceous Green Hat, it worked great as an aperitivo. And, thankfully, the malört helped settle my stomach (Five Guys wasn’t such a great idea afterall).

After a bit of liquid courage, I had finally built up the nerve the try Ginavit neat. END_OF_DOCUMENT_TOKEN_TO_BE_REPLACED 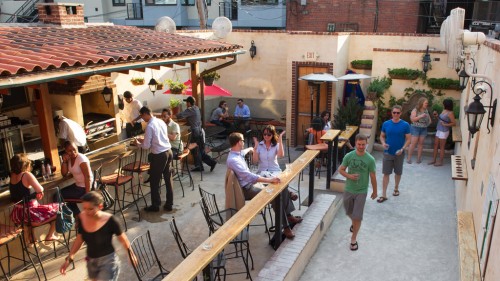 I can’t say U street is the first neighborhood that comes to mind when I’m deciding where to eat dinner. Sure, there are a few choice spots and classic haunts; however, if you ask what word comes to mind first, it’s “drinks,” not “dinner.” But now, I’ve got the right place up my sleeve that delivers on both the drinks and the dinner fronts: Vinoteca.

Having previously thought of Vinoteca as the place where I could satisfy a craving to play bocce while having a good glass of wine (what? Sometimes those things coincide), I somehow forgot that the five-year-old wine bar also served dinner. There’s a mix of small plates for sharing, as well as larger entrees that could even be split if you’re not starving. There are the appetizers you might have seen before, such as pan con tomate topped with jamon Serrano and manchego cheese, or an Appalachian cheese paired with green apples and candied onions. But then there are more unusual bites like the petite, pickled kiwiberry with onion or more jamon layered over a housemade, salty fish cracker.

I know you might not think to opt for liquor over wine at a wine bar, but start off with a cocktail–the kind with interesting ingredients that you’re unlikely to stock in your own home bar but wish you could. For example, the light and refreshing “Bonal sparkling cocktail” combines aperol, grapefruit juice, St. Germain, Bonal Gentiane-Quina, Toso Blanc de Blancs and a dry sparkling wine. Or the “Spanish Spirit” that combines gin with two types of sherry, a French aperitif called quinquina and a housemade thyme syrup.
END_OF_DOCUMENT_TOKEN_TO_BE_REPLACED 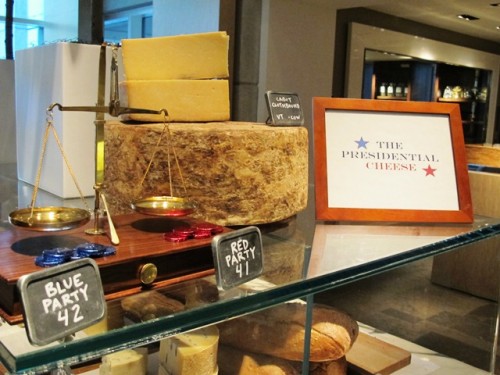 Dates. Those awkward, exciting, beautiful things we all go on at some point. I am by no means an expert in this field- quite far from it- and I don’t have a magical solution for how to make your next date the best you ever had, so unfortunately you won’t be finding the next We Love DC dating service here (sigh). The inspiration for this post really came from a conversation with a friend of mine the other day. He asked me where he should take a girl out, wanting to strike the right balance between serious young professional, trendy and casual. I realized many of us have gone through this mental exercise before. The exhausting over-planning and over- analyzing we do: choosing the right spot for that first interaction (or second or third), focusing on every detail from time, to dress code, to the big goodbye, mulling over tiny logistics as a method of defense to shift our thoughts away from the weirdness that could ensue.  But enough of that.

I think a shared meal is the perfect way to break the ice, a way to bond over something simple that brings anyone, no matter what level of culinary expertise you may have, together. We all share stories around a dinner table, have memories of a favorite meal, and can reveal oneself through a dish. So for me, sharing a meal is a perfect way of getting to know someone, whether it be a sit down dinner or a casual picnic. I decided to write some recommendations for where you can break bread and the ice along the way, in case you need to outsource thinking on the next time your big date is lined up. I polled some of the We Love DC crew for their suggestions as well, as not all of us are food focused daters.

END_OF_DOCUMENT_TOKEN_TO_BE_REPLACED 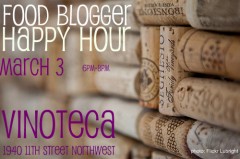 Interested in starting a food blog? Or maybe you have one up-and-running, but you want to share ideas with local bloggers about recipes, photography and software? Or really, maybe you just want to talk about food. We know people who do that, too. Join the DC Food Bloggers tomorrow night for happy hour at Vinoteca.

See you there! And make sure to RSVP on the Facebook fan page. So, here’s my question: the wine bar proliferation over the past few years – fad or fabulous? I mean, with all these places popping up everywhere, are people actually learning about wine? Becoming educated oenophiles? Or still just stabbing nervous fingers in an overwhelming list and hoping like mad they pronounce “viognier” correctly?

Seriously, dear reader, hasn’t it come down to one thing and one thing alone – the size of the charcuterie plate? Isn’t it all about the meat and cheese?

Well, maybe not. In a city like DC there really are a lot of wine connoisseurs who would be far more qualified to talk about this trend than me. I’m just lucky to have two neighborhood wine bars – Cork and Vinoteca – where I can hang out and slowly pick up some idea of what I like. Of those two, I think Vinoteca has evolved the most. It didn’t spring out of the gate fully formed as a Frommer’s pick. There were some hiccups along the way since its opening in fall of 2007. But after several recent sojourns with good service giving spot-on wine recommendations, not to mention one of the best charcuterie plates in the city, I’ve really warmed up to Vinoteca as a favorite drinks spot.

And maybe not just for the sinful duck prosciutto… or the fact that they have tasty venison, lamb, and bison sliders… though that certainly helps!