Because sometimes you just need a picture of a cute dog…in front of the Capitol Building. Be sure to thank MudflapDC for your morning squee allotment. ‘Up’
courtesy of ‘OakleyOriginals’

Yesterday at Dulles International Airport, a Custom and Border Protection’s drug-detecting pup sniffed out approximately 21 pounds of marijuana hidden within packages of chocolate. The drugs were on their way to NYC from Mexico City and had an estimated street value of $17,000. 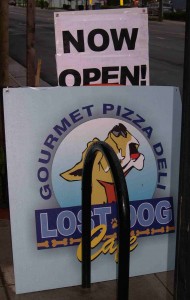 As a big fan of Lost Dog Café, which has drawn crowds in Westover for years, I was thrilled to see a “now open” sign at its new location this weekend, across from the Arlington Cinema ‘n’ Drafthouse.

Like the original, this one has a menu with scores of specialty pizzas, 50-odd sandwiches, and more beers than I could easily count. My man and I checked it out last night, and to our yummy dinner added a Bad Dog a la Mode brownie sundae to celebrate the opening.

This area of Columbia Pike is being redeveloped, and Lost Dog is one of the first new businesses to open there, in the retail area under the first new condos. So more Lost Dog, less waiting. Oh, happy day! 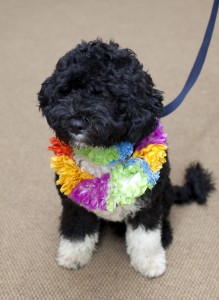 I’m actually really pleased at the way the White House has handled the arrival of the new pup–the post on their blog was understated (“In case anybody was wondering…”) but they must have known that Puppywatch 2009 had been going on since Nov. 2 and people are understandably excited. There was even a minor controversy when a blog leaked a photo before the Washington Post’s exclusive article hit. Hilarious.

So, now that we’ve got an official dog in the White House, can we go back to talking about fixing the economy or even how awesome the rescue of the sea captain from the evil clutches of the pirates was? I just love stories like this– pit bulls get such a bad rap, but this weekend a sweet one (named Jasmine, I might add) saved her family from a fire in Alexandria. The fire started inside a wall behind the washer and dryer around 1:00 am, and the dog’s barking woke the family of five up in time for them all to get out. Good dog!

Up in Petworth, we do love our pets – its in our name. But it seems that quite a few Petworthians don’t like being responsible with their dogs. Specifically their dog’s poop. Out in Grant Circle, a prime dog walking spot, I noticed that winter brought on irresponsibility towards scooping the poop. More and more dog feces were left in the Circle by dog owners too lazy to bring a plastic bag.

So a month ago, I walked through Grant Circle and picked up 7 pounds of frozen feces. At the time, many were shocked and some even doubted that 7lbs figure. Well on Saturday, I repeated the poop scoop adventure and shocked even myself:

To those who may wonder why I would scoop other’s poop, I was thinking of the weekend’s warm spell, and the smell of all that poop, defrosted. I detest cleaning up after irresponsibility just a bit less than the disgust of a public health hazard in my neighborhood.

I just picked up seven pounds of frozen dog feces in Grant Circle and I’m disgusted. Not (yet) with the stench of all that crap when the spring thaw happens, but with the laziness of my neighbourhood’s dog owners.

How hard is it to pick up your pooch’s poop?

You already have too many plastic shopping and newspaper bags in your kitchen. You’re right there when your dog drops a load. Now bend over a pick that sh*t up!

If you think it is too gross, or you’re just too plain lazy, may you step in hot, stinky dog poop come summer. And may you be barefoot too. Caged, the Taxi Dog is all depression and disappointment

In May we adopted Taxi from the Washington Animal Rescue League, where she’d languished for three months after her previous owner returned her (1). As soon as we adopted her, we got her service animal registration done as we never wanted to leave her alone at home when we went out.

Usually she is a very happy dog. She loves to run at the now-closed Clark School and she even loves Dog Beach, but she hates to be alone. When we leave the house for important nearby chores she goes into fits of separation anxiety that are heart-wrenching. Just watch her freak out when I left for a mid-day meeting: