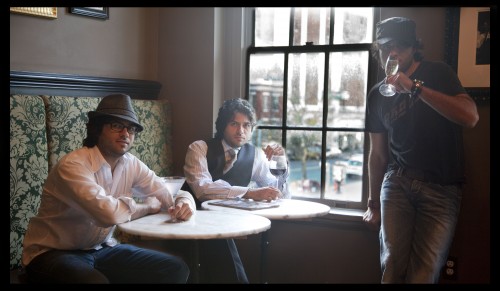 This I find hard to believe, watching him juggle multiple drink orders from both the bar and the servers at one of the busiest spots in DC. Not to mention, this is a man who came to cocktails relatively late – his first taste of liquor wasn’t even until the age of twenty-five. But it’s a fitting job description for someone who strives to run an inviting, approachable bar. He’s got a wry sense of humor and a balanced, classic cocktail style. I genuinely enjoyed sitting at Marvin’s downstairs marble bar getting to know him and his regulars better. Isn’t that the best part about going to a bar anyway?
END_OF_DOCUMENT_TOKEN_TO_BE_REPLACED Fall cocktails… Once upon a time, that just meant drinks with heavy cream. No more, thanks to some brilliant mixology (my waistline is thankful too).

I’ve been sampling some luscious fall drinks. Everyone is rolling out menus featuring autumnal tastes – apple, pear, cinnamon, pepper, rosemary, cardamom – oh my. Spice has cream beat! Mulling and infusion are everywhere. It’s a good season for sipping slowly, admiring how flavors change and deepen over the course of your evening. Sigh.

Another fantastic benefit of all these freshly squeezed juices and housemade sodas and herbal infusions is that many bars are now offering non-alcoholic versions of their cocktails. With lots of parties and events in the fall, if you don’t feel like imbibing or are not able, you should always feel unabashed to ask. A good bartender should be able to respond without making you feel like a second-class citizen.

So let’s get down to it, shall we? Some of my favorite fall cocktails, with the usual quirky candlelit odd-angle photographs…
END_OF_DOCUMENT_TOKEN_TO_BE_REPLACED Marvin, named after DC native Marvin Gaye, is at the intersection of 14th and U. Thanks to the savvy folks behind Eighteenth Street Lounge, The Gibson and Local 16, Marvin is both a bar hot spot and a tasty evening dining destination. The menu pairs southern with Belgian, and has a little something for everyone. On a recent pilgrimage to The Gibson for an after-work drink, a friend and I stopped by Marvin for dinner and had a mostly pleasant experience. END_OF_DOCUMENT_TOKEN_TO_BE_REPLACED

Get used to this metro station, folks, because we’re thinkin’ you’re going to be heading to it quite a lot in the future. The rumors that have been circulating for months about the potential of a new restaurant/bar owned by the folks who brought us Marvin and The Gibson at 14th and U have been confirmed by the Prince of Petworth, who’s basing his report on a confirmation he received from Chris Donatelli, the developer behind the project.

Although the details are not crystal clear on what type of establishment will be, it will be dedicated in some way to Billy Simpson, the owner of Billy Simpson’s House of Seafood that occupied the space before it switched hands. If Marvin and Gibson are any indication, it’s going to be swanky and there’s going to be great beer and a patio. Suh-weeet! Am I going to be hanging out in Petworth a bunch now? Maybe not immediately, but I wouldn’t have dreamed of hanging out on U Street 8 years ago either…sign of changing times for Petworth, perhaps?