So I asked NMAI for a copy of the book, eager to see what new perspectives awaited within. And…I was left wanting. END_OF_DOCUMENT_TOKEN_TO_BE_REPLACED

He was right last year with North Carolina, but will he be right again?

No Cinderella stories here. Kentucky, Kansas State, and Villanova round out the Presidential Bracket’s final four.

How does your bracket match up?

I’m fascinated by all things related to the presidency.  I’m no history buff by any means and I can’t spout off useless presidential facts (you don’t want me on your Trivial Pursuit team), but the office of the POTUS is probably the most unique position anyone could ever be in.  Heck, if I was married, had kids, was religious, had powerful connections, and was a millionaire, I’d even think about running for president one day.  Now there’s a scary thought.

END_OF_DOCUMENT_TOKEN_TO_BE_REPLACED 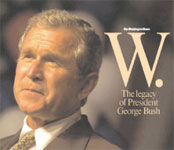 Well the Washington Post can keep flogging that election day paper and selling inauguration day printed blog entries messages to Obama if they want to be unimaginative. The Reverend Sun Myung Moon, on the other hand, knows that it’s foolish to sell one day’s worth of paper when you can sell an aggregation of eight year’s worth! Coffee table book “W” – not a novelization of this film – will contain a selection of the Washington Times‘ unbiased reporting from the Bush Presidency, described thusly:

this compelling coffee table styled book about an extraordinary president in turbulent times. “W” is packed with gripping pictures and stories

Way to show your impartiality, WT.