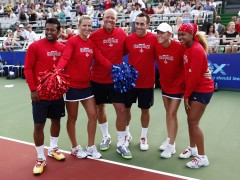 It was looking like the Washington Kastles were headed to the World TeamTennis playoffs again to defend last year’s championship title, however with a 24-15 loss in Boston last night, their season has come to an end.  Had they beaten the Lobsters, they would be battling the New York Sportimes in the conference championship, a rematch of last year’s playoffs.  Those fans who purchased tickets for the potential championship match tonight are entitled to a refund.

Congratulations to the Kastles for another hard-fought, fun month of tennis.  Fans were treated to the amazing talents of Venus Williams, Leander Paes, Rennae Stubbs, Bobby Reynolds, Angela Haynes, and Victoria Azarenka, not to mention opponents including John McEnroe, Martina Hingis, and Anna Kournikova.  Best of luck to those who are headed to the US Open later this summer. Today the Washington Kastles filled out their roster for the 2010 season on World TeamTennis Draft Day.  With an impressive team headlined by the Williams sisters, repeating as WTT champions looks entirely possible.  The Kastles traded for the first overall pick in today’s draft, welcoming doubles masters Leander Paes and Rennae Stubbs back to the team.  The roster is rounded out by Bobby Reynolds and Angela Haynes (we’ll miss you “Boom Boom” and “Puchy”).  And last but certainly not least, coach Murphy Jensen will be back for a second year to fire up the players and entertain the crowd. As if having the world’s #1 women’s tennis player on our team wasn’t enough, the Washington Kastles have added the #5 player as well.  That’s right, both Serena and Venus Williams will be playing for the Kastles this season almost assuring another successful run at the World TeamTennis Championship.  With arguably the best sibling duo in tennis history, the Kastles roster now boasts a combined 61 Grand Slam titles.

In other exciting news for Kastles fans, coach Murphy Jensen will be back again to see if lighting can strike twice.  “It takes world-class talent to win championships and there are no more accomplished athletes than Serena and Venus,” said Murphy, “Last summer was truly a dream season for us, and come July 5, the dream continues in DC.”

END_OF_DOCUMENT_TOKEN_TO_BE_REPLACED In what can only be described as a miraculous weekend of tennis, the Washington Kastles pulled off two huge wins against the New York Sportimes and the Springfield Lasers to become the 2009 World TeamTennis Champions.  Both matches were no easy feat for the Kastles with the match point coming down to the very end.  Just when things could easily go in the other team’s favor, the Kastles stepped up their game and pulled through.  Both matches were a blast for Kastles fans and made for some amazing tennis.

END_OF_DOCUMENT_TOKEN_TO_BE_REPLACED The Washington Kastles, now 5-6, head into the end of their season this week.  Currently in second place in the Eastern Conference, they have their work cut out for them to maintain their position.  They’ve got three tough matches coming up, two of which are against the undefeated Springfield Lasers.  To help their playoff chances the Kastles have signed Nadia Petrova, currently ranked #10 in the world.  It remains to be seen who she will replace or if she will have doubles chemistry with either Rennae Stubbs or Olga Puchkova.

Securing wins in two of the final three matches will earn them a spot in the Eastern Conference Final against the 9-3 Sportimes who they played last week.  Should they lose two matches they will need the help from the Boston Lobsters and the Philadelphia Freedoms.  If the Kastles advance to the finals it will be played here in DC, a rematch you surely won’t want to miss.

While Washington clearly has the best fans in World TeamTennis, seats are still available for this week’s matches so buy your tickets now. In the press conference prior to last night’s World TeamTennis match between the Washington Kastles and the New York Sportimes, John McEnroe was calm, cool, and collected.  Some might say he even seemed bored.  The fifty year old retired tennis legend, once ranked number one in the world and known for his fiery temper, sat emotionless as he answered questions he’s no doubt heard countless times before.  When asked whether he now considers himself an entertainer or an athlete he said, “A little bit of both.  I think people come here expecting me to get angry and yell at someone.”  You think?  The Kastles banked on it and played a video compilation of vintage McEnroe outbursts (“You have GOT to be kidding me!”) on the big screen no less than ten times throughout the evening.  Would McEnroe remain emotionless or would the crowd see the explosion they were hoping for?  With the Sportimes leading the Kastles by two games in the Eastern Conference, there was a lot riding on the line for the night’s match. END_OF_DOCUMENT_TOKEN_TO_BE_REPLACED Tuesday night was a special night for Kastles fans, or more accurately, for Serena Williams fans.  In front of a record sold out crowd, Williams and the Kastles made the Newport Beach Breakers look like a high school JV team.  While Scott Oudsema and Leander Paes lost the opening men’s doubles set, the Kastles quickly recovered, winning 22-12.

END_OF_DOCUMENT_TOKEN_TO_BE_REPLACED Despite a strong start in mixed doubles and a big women’s singles win by Olga Puchkova, the Washington Kastles were defeated last night by the St Louis Aces.  The Aces may have actually benefited from the loss of their marquee player, Anna Kournikova, who is out for the season with a wrist injury.  While she was once ranked eighth in the world in singles and first in doubles, her tennis career has been seriously curtailed in recent years due to injuries.  She still draws quite a crowd and finds time to do charity work including yesterday’s Bloomberg Kids Tennis Clinic.

While the Kastles remain winless at 0-4, there is still hope.  If Puchkova works on her doubles game with Rennae Stubbs and the team reduces their double faults and improves their break point conversions, they stand a good chance of winning.  The players need to get fired up and start living up their motto, “refuse to lose”.

The Kastles play again at home on Sunday against the New York Buzz, so buy a ticket and hope for a win!

It was a beautiful night for tennis at Kastles Stadium, but despite a valiant effort in overtime, the Washington Kastles were handed a loss in front of a sold out crowd by Venus Williams and the Philadelphia Freedoms.  The match started out strong for Washington when Scott “Boom Boom” Oudsema took on Nathan Healey in men’s singles, but the final point went to Healey whose serve was too much for Oudsema to handle.  The Kastles struggled with basics like double faults and return serves throughout the rest of the match, ending with a 23-16 loss.

Those who went to the match to see Venus play weren’t disappointed as she showed off her powerful serve in women’s singles, mixed doubles, and women’s doubles.  It was amazing that Williams, along with Washington’s Rennae Stubbs and Leander Paes, could play at such a high level after competing in the Wimbledon Finals last weekend. The Washington Kastles ended their regular season last night with a 22-17 win over the Western Conference’s last place St Louis Aces. Unfortunately, a beautiful night of tennis turned into quite a rainstorm. The sold out crowd was invited to stay dry in the VIP tent in hopes that the rain would pass, but as soon as the storm got worse and the tent started flooding, team owner Mark Ein made the call to move the match to the East Potomac Tennis Center at Hains Point. Once play resumed, sets of mixed doubles and women’s doubles were split between the two teams, forcing the match into overtime which was won by the Washington-Jones women’s duo.

END_OF_DOCUMENT_TOKEN_TO_BE_REPLACED While the Washington Kastles lost their match yesterday (23-19) against the Philadelphia Freedoms, they played their hearts out until the bitter end. Thanks to an intense women’s singles effort by Sacha Jones, the game went into overtime where she was quickly defeated by Audra Cohen, 1-0.

END_OF_DOCUMENT_TOKEN_TO_BE_REPLACED In a dramatic come-from-behind victory, the Washington Kastles showed John McEnroe and the New York Sportimes that they are not to be messed with on their home court. What started out looking like an easy New York win, the match became a slug fest that came down to a women’s doubles “Supertiebreaker”. Mashona Washington and Sacha Jones out dueled Milagros Sequera and Hana Sromova, beating them 7 to 5 and giving the Kastles an 18-17 win.