Nick Cho, famous for his work as a barista and coffee-shop owner, today surrendered himself to arrest and booking on 82 counts of tax fraud related to the tax debt that shuttered Capitol Hill’s Murky Coffee in 2008. According to the release from the OCFO, posted in full below the cut, he’s facing 180 days in jail for each count, if convicted, along with a $5k fine, and full restitution if convicted. That would be $410,000 in fines, plus restitution for the amounts not filed with the District in 2006 and 2007, as well as 41 years in jail.

The amount specified by the OCFO for delinquent taxes is over $100,000, which would be compounded with penalties, interest and additional fines.

END_OF_DOCUMENT_TOKEN_TO_BE_REPLACED The question that keeps coming up about the Murky closure and Nick Cho’s new shop in D.C. seems to be “why won’t the new place be named Murky?”

Murky Coffee is a registred trademark, and given the tax difficulties that Nick has had with D.C. and lately with Virginia, it’s possible – or perhaps likely – that Nick won’t have the rights to use that name anymore if things go badly for Murky Coffee, LLC. That’s the legal entity that the USPTO lists as the trademark owner.

Pay your taxes, kids. (Unless you’re angling for a cabinet position, of course) 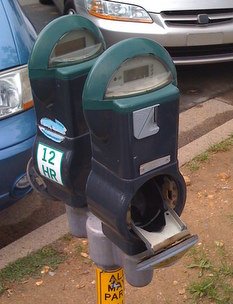 If you’re used to parking your car in the lot outside of Murky Coffee all day, it’s time to find a new parking spot.

Arlington has been replacing parking meters with “Pay and Display” meters.  These new boxes take the old coins (which was my last refuge for all my spare change) and also accept dollar bills and credit cards.  So running out of change is no longer a good excuse.

After a successful test run in other locations (outside the shops at Clarendon was one) they are expanding the program to other areas.  Yesterday, they modified the large parking lot that runs from St. Charles Church to Murky Coffee.

END_OF_DOCUMENT_TOKEN_TO_BE_REPLACED

For those of you who haven’t seen previous posts about Murky Coffee, it does get mentioned here from time to time, as it turns out. The latest thing I can say I love about Murky is this sign I had probably seen a hundred times and not given any thought to. It both tickled and admonished me, delivering efficient coinciding messages. The biscotti are a favorite of my Lovely Wife and she claims they are right good. Me, I am not such a big fan of the hard anise-flavored breads. But my real question is whether I can get it iced. I thought about asking but then thought better of it.

I am at Murky Coffee, where I just heard a conversation in which the barista told a guy that he was not allowed to pour his espresso over ice.

“You can’t have it over ice. It ruins the quality of the coffee. It’s also against our store policy,” the barista said. After the customer left the counter, the barista was fuming and told his coworker, “I almost told that guy not to come back.”

Thanks, Nick, for hiring such helpful young people who uphold basic tenets of customer service. Where would the world be if customers could get what they wanted? This young fellow did a good job protecting the ignorant customer from cold espresso.

Barista guy – get over it. It’s just coffee, not a matter of safety or health, and the guy knows how he wants it.